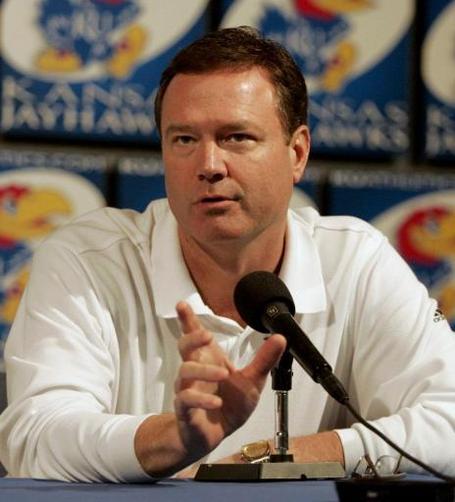 In this week's presser Coach Self previews the Iowa State game, what Mario Little adds to the team and how the Big 12 conference season has started.

Checking in with the player quotes this week are Mario Little and once again Brady Morningstar.

On if Mario Little playing takes some pressure off the younger guys:

“It probably relieves some pressure from our entire team now that we have another piece that we can put in there. And obviously if he’s playing well he can help us win games and make us better, so I think it helps the whole team out.”

On if having multiple guys in double figures bodes well for the future:

“I think it’s a good sign. I think Cole (Aldrich) and Sherron (Collins) will still take the majority of the shots. Last year I thought balance is what gave our team the best chance, this year our best chance is our two leading scorers having productive games. But I really believe that the less shots Sherron has attempted in some games and some situations and he really focused on getting other guys shots is when we have looked our best as a team.”

“They shoot a ton of threes. We played them last year, and watching last year’s tape they shot a ton of threes against us at both places. This year, I could be a little off on this, but I think 40 percent of their shot attempts are threes. So they will let it fly, especially playing at home. They can stretch the defense and they can put a lineup out there where you have to defend all five behind the arc. So it is a challenge, there’s no question about it. Going to Ames is always a challenge. Hopefully we will have our batteries recharged today and really get a couple of good workouts in because I think they are a very capable team.”

On the challenge of playing at Hilton Coliseum:

On if he expected Mario Little to have a good mid-range game:

“That’s what we always thought about him was his mid-range game. We never thought he was a guy who had to live behind the arc or we never saw him as a post guy, we just saw him as a baseline slash and driver and 15-17 foot jump shooter. I think he really shoots it better than what I thought before he got here. He has a nice stroke, and it’s soft. But the strength of his game is still one or two bounces and getting the shot off. He’s a pretty good passer too.”

On the decreased number of shots by Sherron Collins lately:

“I don’t think that we should put a number on him, on how many shots he should take because of some situations, depending on how people guard us and things like that. I will say that 14 is extremely low based on what I thought coming into the season because I didn’t know that we would get adequate scoring around him. We’ve had some other guys step up and score the ball pretty well. At least considering the experience they had coming into the season. I think Sherron is a good scoring guard, but I think he’s a better point guard that can score. His assists numbers are also up in that time stretch if I’m not mistaken.”

“I think he’s doing better. I think Ty is a fabulous prospect. I think he’s gone through a period of time where he has hit, I don’t want to say a wall, but he got away from being as effective because the way he was effective earlier. He played off of his defense and played off of getting the ball to the basket and scored the ball better. He went through a phase where he quit doing those things and struggled scoring. I think the last three or four games he has gotten to the hole better, he’s gotten to the free throw line, he’s done so many nice things. It’s an amazing phenomenon that if you play better offensively, you usually perform better defensively. He seems to have more energy defensively right now.”

On if anything in the Big 12 thus far has surprised him:

“Not surprising. Missouri’s win at Oklahoma State last night was pretty impressive. That was an impressive win. Nebraska’s scores have been very impressive to me. I didn’t see the game last night, but they must have played really well against OU over a period of time in Norman. I do believe Baylor impressed me a lot yesterday by going on the road and winning in Manhattan. There have been some impressive wins out there, there’s no question. But I would say they’re not a surprise to me at all. Our league shouldn’t sleep on Missouri. Missouri has a nice team. They seem to be playing very well right now. I think they have a great chance to be right up at the top of the league along with the other teams that were predicted to do so.”

“I think he’s playing to his size. I don’t know the exact stats, but I think he’s third in the league in scoring and he’s up there in rebounding too. He’s been a presence. I think he’s gone from being a very skilled big guy to a guy that can score on the block too. He’s probably taken less threes than he did last year. To me, that would be something that I would say has impressed me. He’s matured into a more all-around, physical presence.”

On his increase in minutes:

“I think that maybe after the last game (against Texas A&M), I’m going to be on some people’s scouting reports. I know that I need to be in those scouting reports to help the team. I just have see how my health is; how long I can go, how hard I can go. It’s day to day until the doctors tell me different.”

“I hear it’s tough to get a win over there (in Ames). We’re going to have to be focused and together out there because we’re going out on the road. It’s going to 15 versus 14,000 or whatever their capacity is. We’ve got to be one unit.”

On winning games on the road:

“I think we are confident now that the conference has started. We got a good road win at Colorado against a good team. That wasn’t as tough, though, because we had a lot of fans on our side. So when we go to Iowa State it’s going to be harder because we won’t have as many fans.”

“The past couple of years I’ve been there it’s been a pretty tough place to play. It’s always filled; it gets really loud and they always seem to play really well at home. We just have to go in there with the same mindset we had against Colorado. We’ve got to go in there and play hard and get a win.”

“The past couple of games he (Collins) has had quite a few assists. I think when he’s scoring, the defense really keys on him. When he drives to the lane they all collapse so he can kick it out. I think that’s one of the best parts of his game – getting other people shots.”